I am a robotics and perception system researcher/dev with a passion for teasing out the details separating research from production. I love finding new ways to break & fix things in the unending search for bugs and edge cases.

I’m currently working at the Trailab on the next AV dataset project from our team as the Lead Developer. From Aug 2019 to Feb 2021 I worked with Gatik AI as a Senior Research Engineer for Autonomous Vehicles.

I previously was the Software Lead and a Perception Analyst with Autonomoose, the University of Waterloo’s premier self-driving car project and one of the first of its kind to be testing in real Canadian environments. Our software was also showcased twice at CES (2017, 2018) comprising the full autonomy stack of the demo in partnership with Renesas.

I completed my BASc in Systems Design Engineering from the University of Waterloo in 2012 with a minor in German, having spent my third year on exchange at TUBS. My undergraduate areas of focus were control systems, signal processing, and robot dynamics. In 2016 I completed my MASc in Mechanical and Mechatronics Engineering under the supervision of Prof. Steven Waslander with the thesis “Robust Bayesian Detection and Tracking of Lane Boundary Markings for Autonomous Driving”. My graduate areas of focus were computer vision, robot perception, and autonomous vehicles.

I’m an unabashedly huge nerd and enjoy studying random math topics in my spare time. One of my current side projects is experimenting with Voronoi tesselations and randomly controlled colour gradients to generate abstract art. The idea is come up with a sort of discretized bleeds. So far it looks something like: 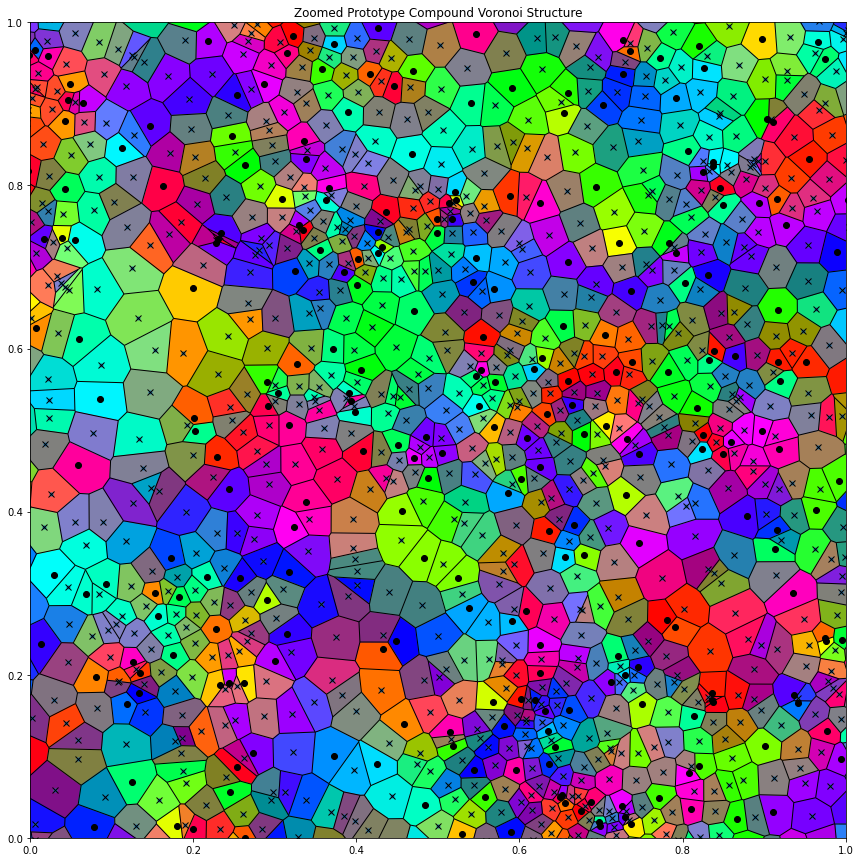 I still want to tweak the border region shapes and the colour sampling to draw from a more perceptually uniform colour space than HSV. So far though, I still think it looks neat.

For Autonomoose I was the Software Lead for the duration of the project. This involved ownership of many architecture and signal topology issues, but I would like to specifically highlight two of the longer-term projects that I owned:

I redesigned our coordinate frame and transform system to follow REP-105 conventions for distributed responsibility of transform estimation. Between all of the different map and sensor frames, there were over 30 frames in the system.

Our previous path planner originated as pure research code, with most of the package contained within a 10k+LOC monolith. I’m refactored and largely rewrote the code to follow OOP practices so that it can be reusable and integrate more easily with newly developed modules or with our industry partners’ software and requirements.

After completing my MASc I worked as a research associate over the summer leading a small team to convert my thesis algorithms from MATLAB to ROS/C++ for real-time testing by an industry partner located in Michigan. The team consisted of myself and two co-op students and the goal was to achieve real-time performance (~10Hz) and demonstrate that the algorithms developed in my thesis could generalize well to markings that differed from those contained in the training dataset.

By the end of the summer, we were able to demonstrate comparable performance even though the system had been trained in a different region. The only notable failures were misdetections in areas where the lane markings had opposite colouring (dark markings against a light background) which was not a feature I had ever seen before and was not in the training set. I presented our published results at SAE World Congress 2017.

The video below shows the results of running ULMA on the dataset from my thesis. Note that the video frames were recorded at 3Hz for the dataset due to HDD throughput limitations. ULMA can perform at ~10Hz.

My thesis focused on the problem of how we can detect lane markings in environments where winter degrades the markings to the edge of visibility, such as here in Canada.

The key challenges that needed to be addressed were:

Challenge 1 was addressed by gathering a data set covering a wide range of marking qualities around the Waterloo Region. This was accomplished using a Multisense S7S stereo camera.

At the time of writing my thesis, the proposed state-of-the-art approach to challenge 2 required a training process that was unreliable for more general applications and required labelled data.

I was able to resolve both challenges 2 and 3 by entirely rewriting the training process for the existing method from scratch. I had the key idea to use EM with the missing data labels as latent variables, which allowed the system to be trained without requiring any labels at all. This would conventionally suffer from mode collapse and model identifiability challenges, but I was also able to demonstrate that by providing extremely weak prior parameter distributions, the EM-trained models would not display either of these weaknesses. This work was completed using MATLAB.

The final contribution of my thesis was demonstrating the importance of using 3D information prior to applying a homography transform to obtain a Bird’s Eye View image. Out-of-plane features, such as cars or signs, often get stretched out in line-like streaks that resemble lane markings as shown below: 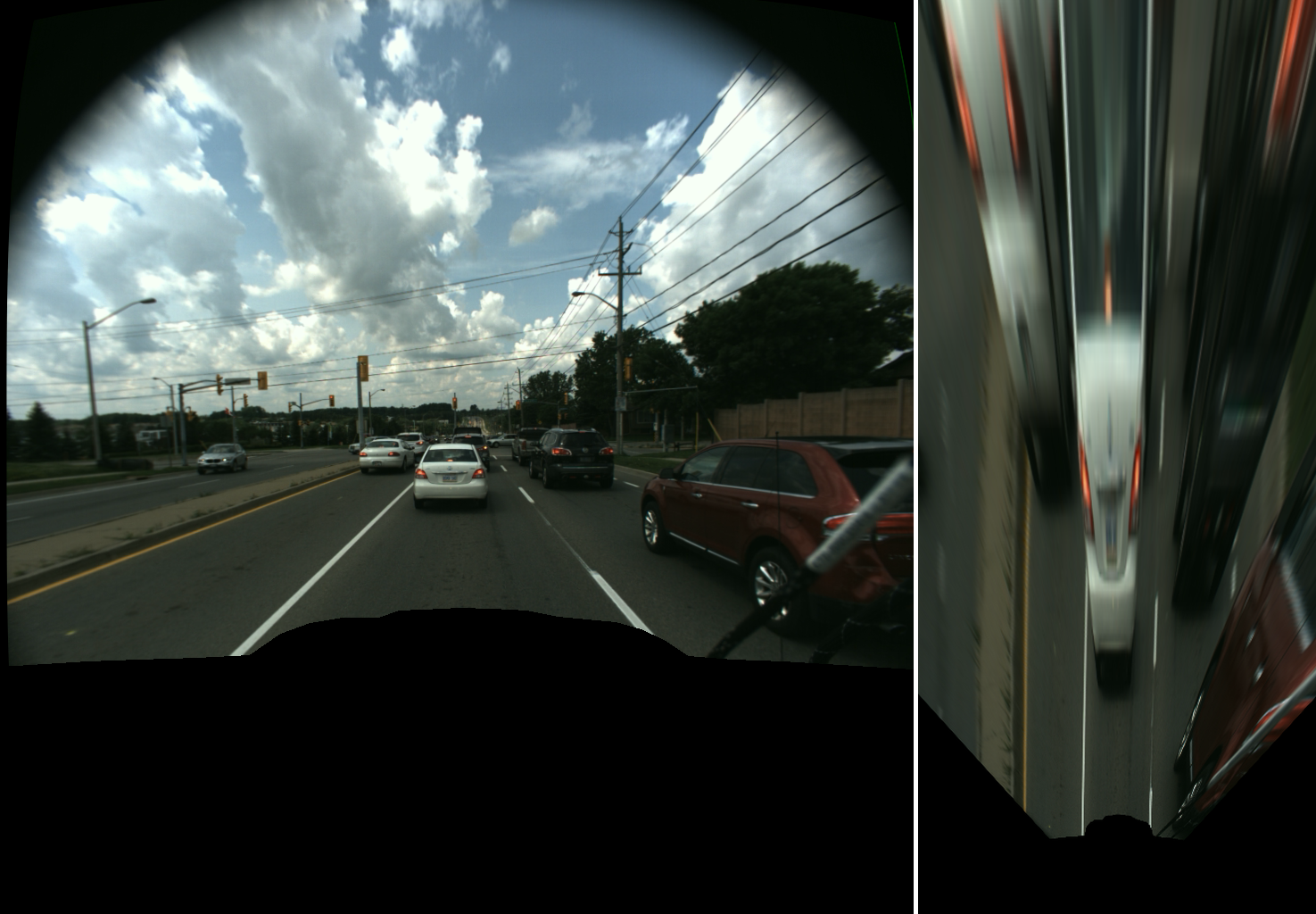 Testing my methods against the KITTI Roads Dataset, I was able to demonstrate that applying a stereo-based height threshold to pre-filter the image dramatically improved the safety of the system by eliminating false lane marking features with a 95.5% Negative Predictive Value. Investigation revealed that the system had difficulty learning to classify the out-of-plane features. As even a trained human observer can struggle to classify such features at a local level (see below), the best solution is to incorporate information beyond what the BEV provides, such as 3D from stereo vision, before leaving an algorithm to struggle to learn it.

Above: One is a signpost, the other is a lane marking

The resulting system can be trained on unlabelled data and demonstrated a very low false-detection rate (~90% precision) on real-world data. This work was later rewritten in C++ for real-time performance as the ULMA project (see above).

Between my BASc and MASc, I worked as a Research Assistant for my soon-to-be MASc supervisor, Prof Steven Waslander, on a fascinating project to perform vision-based Stereo SLAM underwater. In addition to the mechanical difficulties of dealing with underwater environments, underwater stereo vision is particularly difficult because of the refraction that occurs at the boundary between the medium containing the camera (often air) and the medium containing the scene (water).

As refraction is a nonlinear process, significant refraction requires revisiting all of the geometry involved in conventional stereo vision. We were able to correct for the refraction-induced distortions using a physics-based model in which epipolar search-lines become epipolar search-curves. This work culminated in a publication presented at IROS 2013. My primary contribution to the work was my research on the refractive projection of images, the generation and reprojection of epipolar curves, and the calibration method (sections II, III, and IV).